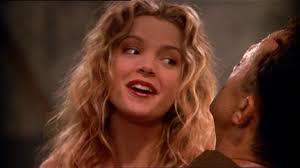 The most narcissistic character in the Buffy The Vampire Slayer series was Glory. All you need to know about her is that she was a totally self-absorbed bitch. She had a gang of hobbits around her lavishing her with praise in the most extravagant praise. She accepted this. In fact, she demanded it. “My name is a Holy name,” she said. But the praise the hobbits gave her was pretty empty. “Your magnificence!” She quickly bored of the grovelling and ass-kissing she got all the time. She’d click her tongue impatiently while they did this. Like an addict subsisting on poor quality stuff, she needed this praise but was bored of it at the same time.

A man whose “friend” request I accepted (never again — I suggest checking them out first) immediately wanted to go on chat with me. Usually, I was relating to people I really liked so I put him off. But he was demanding. If I was busy now, he wanted me to give time to him as soon as I wasn’t busy. I gave him a little test, to see what he was made of. I told him about my blog and suggested he read it. That way, if there was anything to bond around, I would know. He admitted he wasn’t interested in my blog. He was only interested in “me.” But what did he even know about me? He had seen  my picture and I guess he liked my looks. All I was to him was a picture. While I like it when people admire my appearance, I don’t consider it the basis for instant intimacy. I wonder if Glory would have liked it. She was clearly a somatic narcissist although she never fucked anyone. She just liked it when they worshiped her perfection from afar. She might have accepted such homage.

People talk about the “false self” (of a narcissist) vs. the “real self.” But would even a narc welcome praise that was inspired by such a fragment of hir false self?

Buffy found that the reason she couldn’t defeat Glory was that Glory was a god. What is it with God. To hear his worshipers, you’d think he had an unlimited capacity to hear praise. If I were Jesus or Jehovah, I would crush such supplicants. As Hannibal Lecter said, “You may have noticed in the paper yesterday. God dropped a church roof on thirty-four of His worshipers in Texas Wednesday night—just as they were groveling through a hymn.” Could a narc be just as needy as God?