The recovery under discussion here is recovery from relationships with Cluster Bs, most often Narcissists. I found it fascinating to discover a whole subculture with their own terminology. People in this movement usually consider themselves victims or survivors who have broken with their abuser and are now healing. It is certainly a place for people to go when they feel hurt.

The Narc’s Point of View

From The narcissist in love: “The narcissist seeks the perfect kind of romantic love, idealized and unrealistic- like one sees in movies or reads in a book. Being ‘in love’ (some know it as ‘infatuation’) can feel like a drug, causing a ‘high’ sensation and temporarily blinding people to theirr own faults and imperfections, to the dissatisfactions they may feel in other areas of their lives. It makes people feel as if they are the center of the universe and that their lives are perfect. Nothing feels better … while it lasts. It’s certainly understandable why narcissists have such a strong desire to seek this out- it fulfills most of their narcissistic needs.” But nothing remains perfect and one day the narc wakes up to find himself bonded to an ordinary human being. What a let-down. Victims’ groups see the romantic beginning of the relationship as a Machiavellian “love bombing” to con or seduce his “victim” to give him power over her so when the pretense is dropped, the victim is stuck. 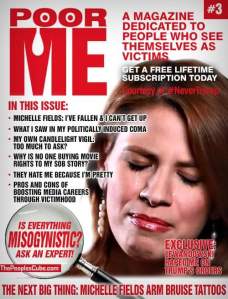 Victimhood? Not All That

I have been offered the mantle of “victim.” To be a victim, you are the person with justice on hir side. Someone else is wicked and you are innocent. After I was “it” in a drugged orgy of sadism, lots of people flocked to my side. They wanted to punish the perp(s). I felt like an ingrate because I realized I was in love with him. The popular support, although well-intended made me feel torn, confused. But today I can say with certainty that I was not a victim then and I’m not a victim now. I reject that persona.

5 thoughts on “The Recovery Movement”