A lot has been written about psychopaths, some insightful, some neutral and some hilarious. Of the hilarious ones, nothing is more arresting than what is said about our eyes. One blog called Psychopaths and Love says, “Many of us have seen firsthand or read descriptions of psychopaths having an intense gaze, a predatory or reptilian stare, or eyes that are lifeless, dead, emotionless, cold, icy, flat, black, or empty.” Why do our eyes look this way? The article continues, “Dr. Reid Meloy’s Reptilian State Theory hypothesizes that psychopaths are more like reptiles than mammals.” So now we’re not mammals. We’re reptiles? The author quotes Dr. Robert Hare as saying, “Many people find it difficult to deal with intense, emotionless, or ‘predatory’ stare of the psychopath. Normal people maintain close eye contact with others for a variety of reasons, but the fixated stare of the psychopath is more prelude to self-gratification and the exercise of power than simple interest or empathetic caring.”

Now that we’ve gotten beyond the over-the-top rhetoric expelling us from the human race and even from the category of “mammal,” we can get some more explicit description of what bothers some people about our “stare.” (Some people aren’t even satisfied with relegating us to membership in another species, even another phylum. To them our stare reveals evil, itself. Lucky Otter says, “there’s nothing inside them except an vast and endless black void of nothingness….Behind the twinkle, the eyes are still reptilian and dead.”) It is “fixated,” “intense,” “emotionless” and “predatory.” The picture shown here indicates to me, “I know what’s really happening.” It reminds me of moments I have had the same godlike, omniscient awareness of being the only one in the room who was awake. A fixated and intense “stare” can simply be a sign that the psychopath is really interested in what s/he is looking at. As I discussed in my blog post about charm, psychopaths are often intensely interested. We recognize some people as deeply mysterious and we love to solve mysteries. Many people think psychopaths are serial killers. But, once disabused of this incorrect stereotype, the “predatory” characterization begs the question of what we are looking for in our “prey.” Most of us are not looking for a victim to be murdered. Many psychopaths are merely looking for someone to have a sexual relationship. In this respect, psychopaths are not very different from ordinary men. Every girl or woman who has dates can attest to the fact that most men want a conquest, that is, to have sex with the woman they are dating. Nobody seems to find this sinister when it is a goal of a “regular” or NT male. When a psychopath does it, it’s “predatory.” The fact that most relationships with psychopaths are short-lived, most “hook-ups” today are, in fact, short lived.

The sooner a couple get horizontal, the more quickly they tend to tire of one another and move on. Again, this is as true of the “non” as it is with the “path.” I must confess bewilderment with the way a psychopath on the make is considered more “predatory” than the NT man on the make. Perhaps the answer is in the adjective in Hare’s statement I haven’t discussed, “emotionless.” Psychopaths are known to be less emotional (and more rational) then the rest of the population. Is the sexual come-on of the “emotionless” psychopath really more “self-gratifying” than the that of the more emotional Don Juans in our midst?

So far, I have only talked about one possible interest a psychopath may have in hir “prey.” But we can have other interests. Someone may be interesting, have information to share, money or even connections to other people. These are all things anyone can desire and try to get from another.

The article goes on, “In my own experience, the psychopath I knew had lambent eyes — brilliantly playful, softly bright, luminous. They twinkled with warmth when he smiled, or so I thought. It was actually the twinkle of amusement as he manipulated me. A few times I saw the light go out in his eyes, and in those moments they became flat and dead.” This brings us to another quality we are reputed to have. We are alleged to have a void within ourselves. Blogger Lucky Otter wrote, “sometimes they can be caught when their mask is momentarily down (usually when they’ve been called out–or caught), and it’s here when we see the emptiness and evil inside them.” Evil? Not merely reptilian? She goes on to say, “It’s not so much a demonic look (which has a sort of life to it) as a dead, lifeless look that is far worse. It’s a malignant look that makes you want to get away from them fast. Like there’s nothing inside them except an vast and endless black void of nothingness. It’s like standing at the precipice of a black hole, and what can be more terrifying than some nameless void that can suck you into itself–and can even swallow light?” WOW! I’m actually impressed! I have a black hole inside me? Good grief!

A new explanation (new to me anyway) for the “psychopathic stare” has been articulated in the article, Subtle Signs of Psychopathy, “Psychopaths look people in the eyes, but only because they learned that it is the proper way to communicate. Eye contact does not come naturally to them. This is why their stare is too strongly fixated on the other person and it looks weird. Some people say that they try to hypnotize their victims. But I believe that sometimes they just try too hard.” Um, OK.

People have always been concerned about each other’s eyes and considered them to be windows to the soul. Interestingly enough, most animals avoid eye-to-eye contact. When stared at by another animal, they interpret that star as a prelude to an attack. When I was a child, I liked to pretend I was a cat like my lovable pet. Once, I get under my cat’s favorite chair and stared at her. My cat didn’t understand that I was playing. She pounced at me as if I had been challenging her space. I never tried that again, understanding what she must have considered my behavior. In the wild, people threatened by a lion or tiger can sometimes bluff the animal by staring it in the eyes. If they are lucky, the beast will think this person must have power to be so unafraid and confrontational. Only the human species sees eye contact as something warm and friendly. I have been told that even some human cultures consider eye-contact as rude. In the Latino cultures, I have heard, looking away is a gesture of submission and respect. Anglos often think the person is being “sneaky” when he is only being polite. 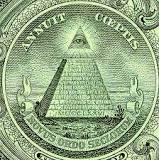 An American dollar bill has a very compelling occultist symbol. It is a pyramid truncated close to its apex. The apex of this pyramid forms a triangle with a single eye within it. This symbol is familiar to Masons. It is variously called the “eye of Horus” (Egyptian) and the “eye of Shiva” (Hindu). The Christian fundamentalists like to believe that the “founding fathers” were Christian fundies like themselves. But many of them were agnostics and free-thinkers. All the American presidents (until JFK) were Masons. The slogan, “in God we trust” was not put on the dollar until the 50’s. Some people say the eye is the eye of God. It certainly was the eye of many Pagan gods, Horus, Osiris, Shiva… It has also been called the eye of the phoenix. Meanwhile, others say the eye is “creepy.”

I am not particularly concerned with the conspiracy theories that the eye is “satanic.” My interest is merely to explore the deep significance the eye holds for humanity. The eye is the “window to the soul.” It is the instrument through which we are “seen.” Many people are fearful and nervous about the extent to which our government has us under surveillance. The eye is indeed a window through which we can see and be seen as well. 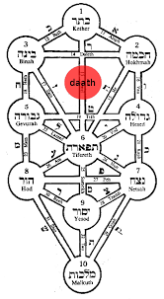 The abyss is something most people fear without knowing why. In the Kabbalah, which is claimed both by the Jews and the Egyptians, the Tree of Life is like a diagram or map of spiritual reality. It’s a strongly felt instrument of occultism. The Golden Dawn called it the Qabbalah and made it a center of their studies. On the Tree of Life, there are spheres or “Sephira” representing aspects of spiritual reality. But there is one place on the Tree where a Sephira is absent. In it’s place is a void, called Daath. Only the bravest and most adventurous occultists dared to explore Daath. It is considered both dangerous and a gateway to the highest forms of wisdom. Coincidentally(?), astronomers speak of the black hole in space where everything is sucked into nothingness.

As can be seen, both the eye and the void are deeply felt by humanity, at least the Western part. The reason psychopaths are feared is, to a great extent, the lack of a conscience. Even Dr. Hare’s book about psychopathy is entitled Without Conscience. The fact that we are not controlled or held back by something most people claim to have within spooks those who are conscience-bound. I discuss this matter in an article on my web site, Free to Choose. We are not all “evil” and we are not forever doing bad things. But the fact that we can if we want to without being bothered by conscience scares the shit out of people. I think this fear is the root of my people’s “creepy” experience of looking into our eyes. Here’s looking at you.