“The way to innocence,to the uncreated and to God leads on, not back, not back to the child, but ever further into sin, ever deeper into human life.”

Steppenwolf is both a book and a movie. I will go on record as a heretic and say that I prefer the movie to the book. What? The book, written by Herman Hesse, is a modern classic. What movie can surpass that? I say the book was so cinematic in its inception that a great movie, which this is, can fully realize its potential. It was directed by Max Von Sydow and stars Dominique Sanda as Hermine. The liner notes on the back of the DVD’s box calls it an “ambitious adoptation of Nobel Prize-winning Herman Hesse’s classic novel.” Well, I would say it has accomplished that ambition. I have only seen this film in English although it is set in Germany and I have come across one in German.

To me, Steppenwolf is about the path of Peh in the Qabalistic Tree of Life. That is the path between Hod (intellect) and Netzach (beauty/feeling). This path is represented in the Tarot as the lightning-struck tower because, I believe, the

ego-self-sufficiency of the intellectual tower of Hod comes to disaster. (Only temporarily as an “ego-death” on an acid trip or a relinquishing of attachment.) It is a path I have been able to identify with on many levels. I’m very serious and find my seriousness often confounded by simplicity. Harry Halle, the protagonist, is a prisoner of his thoughts and conflicts. (He would have made a great blogger.) Wandering the streets, he sees a man holding up a sign announcing The Magic Theatre: For Madmen only. He asks the man about the “entertainment” and the man points to his sign and says, “Not for everybody.” He hands Harry a booklet and disappears. Harry brings it home and reads it.

Finally, deciding his suffering is unbearable, he is on the verge of suicide. “But I want to live!” he cries out desperately. He runs blindly and ends up in a club with a rather dodgy reputation. “Where else could you be at this hour? The

Black Eagle!” This beautiful woman, a Goddess (who reminds me of someone I know in real life), who rescues him from himself, starts a conversation with him. She immediately pulls him down from his scaffold of profundity to the mundane by saying, “Don’t tell me my nose is shiny again!”  He actually reminds me of someone who is on a bad acid trip and regular people who can deal in Malkuth (the earthly sphere) seem like giants.


“It ill becomes you to say you have experienced life and found nothing. You haven’t even tried the easy fun part.” She gets right to the core of his problem by asking him when’s the last time he had to obey anyone. “Obedience is like sex. There’s nothing like it if you haven’t had any for a long time.” “What makes you think I’ll obey you? he asked. “Have you any choice?”

He has interesting dreams that night. He meets Goethe whom he accuses of preaching optimism when he “clearly realizes the utter hopelessness of life.”


“I do?? I don’t imagine you care much for Mozart’s Magic Flute.”


“But Mozart didn’t live to the venerable age of 82. He sang his divine melodies and died.”


“What a stuffy view of Mozart! You should have been a school master. You see Mozart’s peak as a special gift that cost him nothing. Did you forget his suffering? His last extremes of loneliness? His suffering? Now who’s being bourgeois, Honey.”


Everything Goethe (in his dream) harps on the very things Halle has to work on. Then he says something that always gives me chills, it is so profound. “No wonder you’re so grouchy. If you take time seriously, there is no time in eternity. Just enough for a joke.

When he sees Hermine again, she says, “You will obey my orders. Most of them will be fun and easy. But, in the end, after you have fallen in love with me, I need you to do something that is very beautiful and very important.”


Hermine’s first order is to learn how to dance. This seems completely beneath him. Such trivia! But he lets her teach him and then take him to a club. The proprietor of Pablo’s Place, Pablo, is played by the same actor who later plays Mozart. The connection is made quite obvious. Later, Pablo asks Harry if he likes music.


“Yes. Well, it depends. I never thought I could like this kind of music.”


“Well, you can hardly put it on the same level as our classical tradition.”

Harry’s progress on the path of Peh continues until he comes to a costume ball. He cannot find Hermine. He gets frantic until Goethe says, “Lost your number? Take mine.” He hands him a disk that reads, “The Magic Theatre For Madmen Only. Hermine is in Hell.”


“Is this the means by which you are making me fall in love with you?”


“You are even willing to go to Hell to find me?” 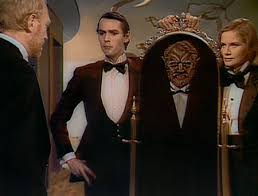 The people who have guided Harry’s life are all assembled in a room. Pablo says solemnly, “We would like to invite you to a little entertainment. You can enter our Magic Theatre but the cost of admission will be a trifling little suicide. Harry sees images of himself probably from other incarnations. Then a flame obliterates them. 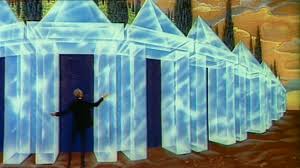 Harry enters the Magic Theatre (actually a psychedelic trip). “As many doors as you want to open and, behind each one, exactly what you need.” The most interesting (to me) event in his trip is where he meets Goethe (again). Goethe introduces himself as a chess player. “I need the pieces. I can’t play without the pieces (of your personality). Now, tell me which one is you?” Harry looks frantically at each piece to find out which one he is.


Goethe tells him. “No. You are the whole game.”


“So many pieces! Isn’t that schizophrenia?”


“What is this game called?”


“Life. So your personality has fallen apart? Rearrange it the way you like.”


Later, Harry see Hermine and remembers his promise to kill Hermine once he’s fallen in love with her. So he stabs her. He sees Mozart (who looks like Pablo) who is listening to a crude radio playing some obscure piece. Harry proclaims horror at the way the radio static is “ruining” the music. “You must listen past the static to the music. Anyway, it ill becomes you to be a critic of music or of life. What is this messy business with the knife? I suppose now you want to find a way to evade the consequences of this butchery.”

“What a pathetic cringer you are, Harry. But you’ll learn humor yet.” He picks up the slain Hermine as inconsequential as a piece of paper.

The last scene in Steppenwolf, is called The Execution of Harry. “Here stands before you Herr Haller who has shown himself devoid of humor and tried to use our Magic Theater as a tool of suicide. We sentence him to eternal life and suspend for 24 hours his right to use the Magic Theater.” Harry understands at last and breaks into a hearty laugh.