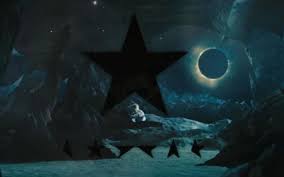 Like many others, I am fascinated by David Bowie’s parting album, Blackstar. I have combed the web for interpretations of the title song, in particular. Interpretations abound. The Black Star has been identified with many things: the planet Saturn, cancer, a song by Elvis, the Midnight Sun, the new moon, Nibiru (a planet that’s gonna crash into Earth).

Almost everyone loves a mystery and Blackstar is nothing but. A hauntingly beautiful song recorded days before the author’s death can’t help but invoke mystery. Death, itself, is the ultimate mystery. Those who have gone beyond know something the rest of us can only guess about. Even a man on the brink of death doesn’t really know although he’s facing the immediacy of it in a way most of us have not had to do yet. Not only did Bowie make Blackstar at the brink of his death, Bowie is a great musician and visionary. All his life, he had the heart of an explorer, delving into occult explorations. We know he was a member of OTO. However, the rumor factory is always on high gear when the occult is involved so some of the most lurid stories get told. The Illuminati was a group in Bavaria in 1776. It’s goals were enlightenment, opposition to superstition and also to resist state oppression. It was outlawed along with Masonic orders. Since then, some various organizations calling themselves the Illuminati were founded. None of them were close to the fantasies of the Urban Legend Machine. According to urban legend, the Illuminati is a powerful shadow government to which the most powerful people in politics and entertainment are forced to belong. This group is dedicated to creating the New World Order, a totalitarian

one-world government. They have been blamed for Communism, Satanism and Nazism. Funny, Chick Comics blames the same things on the Jesuits. Only today, I heard someone say Wall Street created Communism.

Another theory which encompasses the totality of Western culture, including both Bowie and Harry Potter is called Wholly Science. This site is run by a Johan Oldenkamp. He has a total philosophy which encompasses everything under one roof. Mr. Oldenkamp informs us that anyone who doesn’t want to watch his 2 hour videos isn’t worthy of knowing the Truth. Which informs me that he is a narc. Be that as it may, this video on Bowie is interesting as it reveals some astonishing coincidences. For example, Bowie died on the new moon, which is also known as a Black Star. In addition, Princess Diana died on a  new moon. Diana is the name of the moon goddess in the Roman belief system. Selena was the name of the moon goddess in

Greek mythology. The star Selena also died during a new moon. Bowie was 69 years old when he died. That number happens to represent the Astrological sign of Cancer, which Bowie died of. There is a lot of gematria in this video. In gematria, you add numbers and tweak them until the represent something significant. He also mentioned that the TV show, The Simpsons, made references to Bowie on the day of his death. To Oldenkamp’s credit, he enters a diatribe against the consumption of animal products such as milk, which is very carcinogenic, according to him. Bowie died of cancer. Get the connection? But I do agree with him that a vegan diet is the healthiest one which our bodies are designed to consume.

Another blog, created by Kyle B. Still,  takes a crack at interpreting the video by looking at ancient gnostic writings (as does Oldenkamp). “The Gnostics were an early Christian sect – quite possibly even the original Christian sect, depending on who you ask. Their writings would seem strange and disturbing to modern day Christians because the Gnostics believed that the 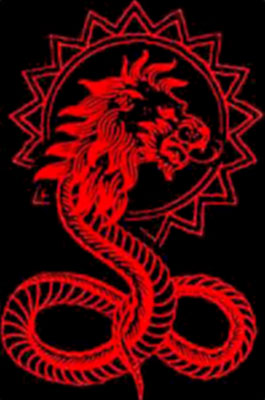 God of the Old Testament was an evil demon. According to the Gnostics, he was created by accident and, because he was blind and demented, he couldn’t see any other gods, thus he believed that he was the only god in existence. From that perspective, a lot of the asshole-ish stuff done by the God of the Old Testament makes a little more sense.” The Gnostics wrote about beings called “archons” who are “parasites from a ‘higher dimension’ who feed on human energy. This explains why Bowie is in a room full of people who are shaking and jerking around. What seems like random weirdness may actually be a representation of people being worked up by various dramas and rituals before being milked of etheric energy. If you’ve ever been on a battlefield or watched a large sporting event or attended a megachurch, then from a Gnostic perspective you could assume that there were god-critters floating overhead and sucking on the energy generated by the excited human livestock.” Oldenkamp calls them “psychopaths.”

Bowie’s song Station to Station contains the line “Here are we, one magical movement from Kether to Malkuth.” In the Qabalistic Tree of Life, Malkuth is the physical, the “lowest” sphere. Most magical societies start there and have their initiates climb up  towards Kether (the summit). In OTO, however, they do it backwards, starting in Kether and working their way downwards. Interestingly, Bowie sings, “We were born upside down, born the wrong way ’round.” It seems not all species are born head-first. But some are.

There are so many questions. “On the day he died, spirit rose a meter high and stepped aside. Somebody else took his place and bravely cried, ‘I am a blackstar.'” Who was “he?” Who was the “Someone else” who “took his place?” When Bowie says, “Just go with me,” I feel drawn. It seems dangerous but so intriguing. Then he sings, “I’m a take you home.” Why does he use the dialect of African Americans here? Then he sings, “You’re a flash in the pan,” and thumbs his nose at (us). Then he poses narcissistically and intones, “I’m the great I Am,” something some people consider blasphemous. Why are they all shaking? What’s with the crucified scarecrows? Could he be implying that the “he” whose spirit rose a meter and stepped aside was Christ? That the spirit of Christ was replaced by “someone else?” See how easy it is to trip on the meaning?  Maybe Bowie’s spirit is laughing at our earnest efforts to understand him.

I think the scenes where he is blindfolded with buttons instead of eyes represents looking within. Which we all must do after all to find truth, no matter how compelling and mysterious someone else’s hints may be. 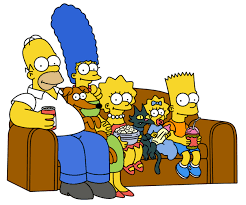 One thought on “I am a Blackstar”