Why Should Shrinks Have All the Fun?

In looking over the links regarding psychopathy in my Cluster B page, I notice they tend to fall into three categories.

Drs. Cleckley and Hare did invaluable work in defining the subject and drawing clear parameters. Although many members of the general public still remain ignorant and continue to hold stereotypes gathered from the popular media, a growing number of laypeople are educated and knowledgeable on this topic. The blogosphere is full of intelligent and sophisticated discussion by people who have read the important books and can debate fluently their points of view.

Hervey Cleckley was a psychiatrist, a medical doctor who practiced psychiatry. Robert Hare is a psychologist, an expert on the mind who is not a medical doctor. He was greatly influenced by Dr. Cleckley in developing his own ideas which are now the cornerstone of modern man’s understanding of psychopathy. While fully accepted by his academic colleagues, who, indeed, consider his work to be the gold standard in the field, Dr. Hare has also written a lot that is accessible to the layman. His Without Conscience is widely read by layfolk. In addition, Hare has written for magazines and appeared in popular documentaries about psychopathy, notably, Psychopath Night, seen on UK’s Channel 4, and The Psychopath Next Door. In my Hare Mellowing? I discuss shifts I have seen in his attitude and opinion on psychopaths.

Psychopathy is not listed in the DSM (Diagnostic and Statistical Manual) so it seems not to be officially a “disorder.” Hare has recently stated that psychopaths are “not disordered” and don’t have a “deficit.” Yet, it is still treated as something only professionals are qualified to “diagnose” or access. The PCL-R is still administered to prison inmates as a way to decide if they are likely to re-offend after they get out of prison. The results of this checklist are taken seriously by the parole boards as psychopaths are considered poor risks. Hare didn’t want to make his test available to prisons at first. He worried that it could be used in a way to compromise people’s rights.

Abraham Gentry has written a manual for prisoners on how to avoid the diagnosis of psychopath. Parole boards deny parole to psychopaths.  Lawyers for defendants have also raised objections to the prejudicial potential of such an assessment. In Abraham Gentry’s words, “Psychology is a soft science. I do not mean this as an insult to the field. But the simple fact is that people are very complicated. It is a ‘touchy feely’ field and different experts can come up with very different conclusions about the same thing.”

One reason professionals want to keep assessment in their own hands is concern at what a label like “psychopath” can do to the bearer of that label. It is certainly one of the most stigmatized “conditions” there is. Sure, being known as a “schizophrenic” can be pretty damaging. But only psychopathy has a moral judgement attached to it. Psychopaths are known for hiding behind a mask to escape such judgment. I, myself, had to do some hard thinking about the consequences before I took the plunge. M.E. Thomas lost her job when her identity was discovered. Being retired, I didn’t have to worry about that. Still, more and more psychopaths are coming out and speaking for ourselves. We are tired of being talked about.

The Encyclopedia of Mental Disorders Forum says, “Obviously, diagnosing someone as a psychopath is a very serious step. It has important implications for a person and for his or her associates in family, clinical and forensic settings. Therefore, the test must be administered by professionals who have been specifically trained in its use and who have a wide-ranging and up-to-date familiarity with studies of psychopathy.” What “up-to-date” studies of psychopathy? What more do professionals know that isn’t available to the public? The only possibility is the brain scan.

One area of science that could potentially turn diagnosis from subjective to objective is the MRI brain scan. Many neurologists claim that the brains of psychopaths have a characteristic appearance that is distinctive enough to identify psychopaths. How exact a science this is has been debated and no clear consensus seems to exist. Dr. James Fallon famously discovered his own brain was that of a psychopath when he accidentally saw his own brain scan without knowing it was his until he pulled the tape off his own name. He wrote a book about the journey towards self-knowledge called The Psychopath Inside. 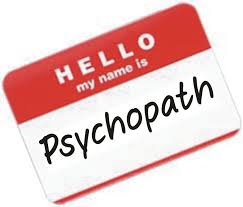 Many outspoken psychopaths have never been professionally diagnosed. The MRI brain scan and the PCL-R are not readily available to people who are not in the penal system and then the process is out of their control. Diagnosis is in the hands of an elite that dictates the terms in which we can even be accessed. Many don’t even want to bother with it. We know who we are and we can pretty accurately recognize each other as well. We certainly know the characteristics on the checklist. Do we really need an advanced degree in psychology to recognize these characteristics in ourselves and others? It’s almost become a casual parlor game to “diagnose” characters in movies and novels. It isn’t official but it is also pretty easy a lot of the time. “This one is a narc (narcissist). That one seems borderline.” I think our guesses are often on target. For example, Lucky Otter said Rowena (in Mary Jane Harper Cried Last Night) was borderline. Her mother was clearly narcissistic. Sometimes common sense trumps dogma.

The second category above, those laypeople who talk about psychopaths as Other, are equally confident of their ability to know us when they see us. Their blogs often provide questionnaires with which visitors can determine if their significant other is a narc or a psychopath.

When  all is said and done, I’m kind of torn. I like having psychopathy nicely defined. There can be so much confusion where there is no consensus. With all the Hollywood sensationalism, sloppy thinking is always something to guard against. But I also want to have a voice of my own in all this as long as I stick to the agreed-upon definition I think I’m being reasonable.