Dr. Lector amused himself—he has extensive internal resources and can entertain himself for years at a time. His thoughts were no more bound by fear or kindness than Milton’s were by physics. He was free in his head. 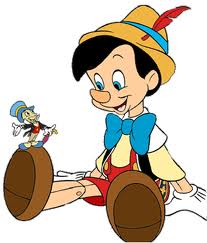 In Pinocchio, a good fairy gave Jiminy Cricket the job of being the conscience to a wooden puppet. At the same time, she gave the puppet the ability to move at will. Pinocchio didn’t know what was right or wrong. Jiminy was there to guide him. But Pinocchio was free, irrespective of the cricket, to choose his course of action. He often ignored his “conscience” and got into trouble. Jiminy and the fairy rescued him. But he learned more from his mistakes than from Jiminy.

What is “conscience?” My Google search defined it as, “an inner feeling or voice viewed as acting as a guide to the rightness or wrongness of one’s behavior.” Several other definitions always include the word “feeling.” Most of them then follow this with the concept of guilt. Merriam-Webster defined it as “the part of the mind that makes you aware of your actions as being either morally right or wrong. : a feeling that something you have done is morally wrong … “ Thus “conscience” seems to be inseparable from the “feeling of guilt.” Wikipedia defines “guilt” as “Guilt may refer to: Guilt (emotion), an emotion that occurs when a person believes that they have violated a moral standard that they themselves believe in … “ Of course, there’s the legal definition which isn’t about feelings. But conscience and guilt seem to be closely bound together by feeling. When people all accept one philosophy, such as Christianity, as the Truth, guilt and conscience reinforce that philosophy. Today’s world is a smorgasbord of philosophies and religions, therefore, it is problematic where a conscience is supposed to lead one. I guess people are expected to derive their conscience from inner values. So one man’s conscience may conflict radically with that of another man. For example, Officer Wilson, the cop in Missouri who shot an unarmed teenager says his conscience is clear. Who can argue with that as everyone’s conscience is his own, individual creation. Conscience can justify any act, no matter how heinous.

Conscience makes cowards of us all. Does this explain the fearlessness of the psychopath?

Although conscience is no longer uniform, there is a strange assumption most people seem to have that you must have a conscience to be a good person. Those without a conscience are thought to be “bad.” What makes people “good” is the feeling of guilt they have if they do something that violates their conscience. That seems to go along with the idea that only punishment can make people “good.”

“Much is written about psychopaths lacking a conscience, with works like Without Conscience by Dr Robert Hare, and such an opinion is wide spread by experts and laymen alike. In truth though, these people fail to understand the nature of the conscience and to remove their own subjectiveness when analyzing the issue. Psychopaths do have a conscience, it is merely completely personal and relates only to personal perspectives and standards. This is in contrast to “normal” people in this time and setting who’s conscience is a reflection of societal perspectives and standards.”

Psychopaths are naturally immune to the social conditioning that people learn by, or rather are indoctrinated into at an early age. The job of the conscience is to check the self- analyzing current behaviors, emotions and thinking against the long term decided perspectives and standards of the individual. Where a typical person learns what their society and care givers consider to be truths and standards in their environment, and integrates this into their own conscience, a psychopath doesn’t take on what others have told them is truth and socially acceptable, they make their mind up based on their own experiences and perspective.

Some people say that conscience is really driven by empathy which Merriam-Webster define as “the feeling that you understand and share another person’s experiences and emotions : the ability to share someone else’s feelings …” This takes it into the realm of intuition. There is no real way to objectively determine whether someone’s intuition is correct of not. There is definitely a notion that empathy makes someone a better person.

“I mean, look at you. You’re right. You’re out there. I’m in here. But who’s free, Kev? I mean, really free? You or me? Think about that tonight. Where are the real bars, Kev? Out there” — he points at the window — “or in here?” (He reaches forward ever so lightly, touches my left temple.)

Psychopaths are widely hated because we do not have a conscience, guilt-feelings or empathy. In short, we are deficient in the ability to connect with other people. We are driven more by our rational brain, Most psychopaths learn to emulate feelings we don’t have in order to fit in. M.E. Thomas said she sometimes felt like a character in the movie, Bladerunner, having to watch her step every minute not to give herself away. Most people think psychopaths are dangerous preditors. Robert Hare calls us “social preditors.” The public associates us with serial killers although only a small number of psychopaths ever kill anyone. We can manipulate people, often as a game of power. It can give one a heady feeling to know one is calling the shots outside of other people’s awareness. This gives one a powerful experience of grandiosity. Psychopaths have the reputation of using our cunning only to hurt people. Sam Vaknin said, on the contrary, “The vast majority of psychopaths, like an iceberg, are underwater, and like an iceberg, they are inert.” But not having a conscience, that is, a feeling that one must act a certain way does not force a psychopath to do wrong. A psychopath’s lack of conscience gives us a choice. One can objectively know right from wrong. In fact, the law presumes that psychopaths know right from wrong objectively which is why we are held responsible for crimes we commit. Knowing what is right and what is wrong can function as a guide just as effectively as a conscience. Not needing to beat oneself up with guilt feelings, really causes a psychopath to deserve more credit for doing right. A free choice is automatically a moral choice. But the fact that psychopaths can chose to do wrong scares people. Psychologist, Martha Stout, wrote a book called The Sociopath Next Door. The book has an introduction about how “terrible” it is to be without a conscience. A well-delivered reading of this essay is on YouTube. How do they know what choice psychopaths will make? There is such a thing as a “pro social” psychopath. James Fallon is one as well as others living useful, productive lives in their chosen profession. They can work as surgeons, ball players, lawyers or a myriad other group of occupations which require single-minded focus and a mind not clouded by emotion.

In recent years, the Diagnostic Statistical Manual has grown from a slim volume to an enormous tomb and with it’s width, it’s influence also grew until it was the size of a bully kicking the other kids off the playground. Scholars of psychology and psychiatry met regularly to decide what would go into it. Dr. Hervey Cleckley and Dr. Robert Hare developed the concept of psychopathy. Dr. Hare’s checklist is the acknowledged defining and diagnostic tool for what “psychopathy” means. But a powerful group refused to accept it. They found concepts such as “lack of empathy” too subjective and considered a more “scientific” concept based more strictly on overt behavior. Therefore, they replaced psychopathy with the “antisocial personality disorder.” In embracing this term, psychology lost the depth and subtlety that was part of psychopathy. It became an index of criminality. A criminal could be diagnosed with antisocial personality disorder even if he felt empathy and guilt. Feelings were just too damned unscientific. You can’t even measure them, for goodness sake. However, psychopaths’ brains have distinct differences from normal ones. The frontal orbital cortex which is fed impulses through the amygdala, often appears dark and inactive when a psychopath is subjected to a PET brain scan. This characteristic isn’t part of the ASPD diagnostic criteria. Sounds very scientific to me but what do I know. I’m only a lowly layman. So diagnosed psychopaths like M.E. Thomas couldn’t have ASPD since she is not a criminal. Hail science! Since psychopathy isn’t listed in the DSM as a personality disorder, the real verdict of psychiatry is that psychopathy isn’t a disorder. Robert Hare has stated this specifically. “Psychopaths are not disordered. They have no deficit.” Well that’s that.

Originally a self-diagnosed psychopath, I have since been diagnosed ASPD by a DSM-infested team of shrinks. (The DSM doesn’t use the word “psychopathy” but prefer the behaviorist “anti-social personality disorder.”) As Sam Vaknin said, the field of psychology has promise but only if it is approached as a philosophy. Professionals such as Kevin Dutton, James Fallon and even Robert Hare are A-OK in my book. Most of them, not so much. I Don’t Suffer from Psychopathy.

I wrote the comment on someone’s blog that had a revolting number of hostile comments after it, all signed “anomynous” and all denying the blogger is a “real” psychopath:

I notice most of the hostile comments here are labeled “anonymous.” Seems like you haters can dish it out but not take it. I also find it interesting that many people like to deny the psychopathy of anyone who proclaims him/herself as a psychopath even when they’ve been diagnosed. None of these anonymous nay sayers are able to claim professional credentials but still seem to think they are more qualified than a professional to contradict his/her professional opinion. At the same time, people are highly prone to call people “psychopaths” when they have done something the hater doesn’t like.

I challenge every anonymous poster to identify him/herself or shut the fuck up.

3 thoughts on “Free to Choose”