There’s a book out called A Generation of Sociopaths, by Bruce Cannon Gibney J.D. And it turns out that Gibney is writing about the Boomers. Another, more interesting book has been available for a while. It’s called The Fourth Turning by William Strauss and Neil Howe. In a nutshell, the book propounds a theory that history is cyclical. Society repeats a pattern approximately every hundred years. Of course, the same things don’t happen. But a remarkable similarity can be seen in each repetition. The cycles are called Saeculum and each Saeculum has four “turnings” when generations start to move in new directions (new from where they are but repetitive in terms of other Saeculum. The authors named the archetypes of the four generations in each Saeculum Heroes, Artists, Prophets, and Nomads. I’m not going into this theory in any depth and I’m certainly not critiquing it except I recommend it as something worth reading. One reason this book is of interest is that Steve Bannon (see my last post) is an advocate of the theory and has his own take on it (see Generation Zero, Bannon’s video, also available in my last post). This should be sufficient orientation for a discussion of A Generation of Sociopaths.

The Boomers are born between 1943 and 1960 according to Strauss and Howe. Our archetype is Prophet. (Every generation has both an archetype and a popular nickname.) Gibney defines us as having been born between 1940 and 1960. Yes, I am a Boomer. I am very proud to be a Boomer. I think my generation is the greatest, perhaps, in the history of the world. (Remember, I am grandiose.) Grandiose or not, I am reasonably confident that the greatness of my generation stands on it’s own merit. Gibney doesn’t think so. When he calls us “sociopaths,” he is not trying to pay us a complement. In fact, he blames my generation for most, if not all, of the malaise of the United States today. As a psychopath, myself, I have wondered where people with quirks such as “personality disorders” fit into the pattern. But Gibney thinks sociopathy is the norm for Boomers and lack of sociopathy is the exception. He reassures Boomers in the introduction that he is not calling us all socios.

Since he is devoting an entire book to dissing a whole generation, one has to wonder what generation he belongs to. I have done an extensive search of the internet. I have been unable to find his birth date. Even Wikipedia, which always contains the dates of birth of their subjects, is mute on this piece of data. I find it very strange that someone who puts that much emphasis on generations wouldn’t want us to know what generation he is. I do know that

his college roommate founded Paypal in 1998. So, subtracting 20 from 1998, I can estimate his birth as having occurred around 1978 or maybe a few years earlier. That would place him in the Nomad Archetype, popularly known as Generation X. His generation has been often spoken of as a slacker generation. The movie Dazed and Confused is about Generation X. No wonder he has kept his birth date a secret. (An interview with Gibney later divulged the fact that he is, in fact, a Gen Xer.) Of course, according to Gibney, the relative stagnation (his word) of business during the early adulthood of Gen X is the fault of the Boomers. Another interesting fact about Gibney is his class position. He is a venture capitalist, one of the money guys who are naturally inclined to take a dim view of radicals and revolutionaries. This is a fact to keep in mind when considering Gibney’s opinion of the role Boomers (revolutionaries to the core) have played in American history. Comparing Gibney’s views with Steve Bannon’s shows as much similarity as “traits” Boomers have in common with traits on the PCL-R. According to both men, the Boomers are spoiled, narcissistic and self-indulgent. That is what has destroyed the US economy, not the giant suction of all the wealth from the rest of us to the 1%.

Gibney has a lovely vision of what the United States ought to be and would be if not for us nasty Boomers. Social Security was instituted by FDR, not a Boomer, but a Missionary (also a Prophet Archetype but a different Saeculum). “A long and pleasant retirement is both a historical curiosity and a financial improbability. Until relatively recently, only the rich could retire. Everyone else simply worked until the arrival of disabling infirmity and then waited for the gruesome end: That was it.” Isn’t this a lovely look at what life could be if Bannon and Gibney had their way? All who would prefer the “sociopathic” Boomers’ way, raise your hands. It’s pretty rich for a Wall Street capitalist to accuse Boomers of lack of empathy. At a time when Trump and Ryan are trying their darnedest to realize the dystopian  vision Gibney has laid out, the modern, industrialized world is aghast that anyone would be deliberately trying to subject citizens of the United States to this kind of nightmare. 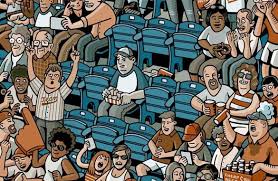 Since Gibney is using the accusation of Sociopathy to attack the Boomers, my first impulse was to defend my generation against the charge. However, as a psychopath, I have always thought my “kind” is unfairly maligned. So, rather than try to prove Boomers are not sociopaths, I will revel in that description, only differing with it when I spot a glaring contradiction. (For example, I know of Boomers who show a great deal of empathy and are not promiscuous.) 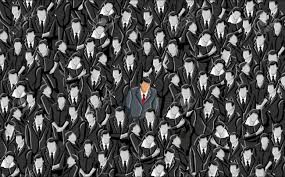 Gibney starts by waxing nostalgic about the good old days in which children were not “indulged.” These golden days of discipline were ended when Benjamin Spock published his infamous Baby and Child Care in 1946. I don’t think child care really changed all that radically with the introduction of Spock. In 1950, The Lonely Crowd described changes in the rearing of middle class children, in any case. Instead of the rod, parents used arguments to persuade their kids to do what they wanted. Children learned how to debate parents with the skill of lawyers but also became super-sensitive to emotional nuances. A disapproving look could cause more fear in a middle-class child than a 20-minute whipping in a lower or working-class kid. Of course, The Lonely Crowd was talking about the Silent Generation, not the Boomers. Too bad for Gibney.

Concerning the good old pedagogy, where children were toilet trained at 3 months (before their sphincters were really developed), Alice Miller (For Their Own Good) wrote a critique of how such an upbringing can be harmful. She called it poisonous pedagogy and explained that children whose needs were silenced by those who didn’t “spare the rod” usually forgot

their experiences all the better to repeat them on the next generation.

Besides the nefarious influence of Spock, there was the scourge of television turning these Boomers in to the little monsters that they became. Gibney claims that their performance on standardized tests went down. True, Boomers had “higher self esteem,” and less depression, but they were also more susceptible to peer pressure. One needs to recall that the Silents were described as “other directed” so this trend, for good or bad, was not exclusive to Boomers.

But then these monsters grew up and reached college age and the shit hit the fan with the war in Vietnam. Gibney doesn’t think that war as all that bad when one compares it to other wars. Gibney put the fact that children were napalmed, whole villages destroyed, atrocities such as My Lai were occurring in our names in perspective. What about the genocide of indigenous Americans which occurred long before us nasty Boomers came to spoil the grandeur that was America. Here is what one Boomer experienced during the era of Vietnam and why he ended up leading the

Weather Underground Organization. “I felt as if my whole generation had turned a corner and walked smack into a violent mugging, a rape in progress: the victim, a total stranger—small, wiry, and ragged with odd, alien clothes, the bearing and whiff of the foreigner; she looked poor, she spoke no English, she held no currency. But—and this was the shock—the attacker was a man we all knew well, an everyday presence, someone we’d admired vaguely without ever actually examining the basis for that admiration.” I too remember the shock I experienced when news of My Lai came out. I was in high school. I looked around the classroom at the boys. They were just boys, classmates. How could boys like this have been capable of such horrors? I was very innocent then. But Gibney thinks Boomers overreacted to this. Instead of protesting, we should have sung patriotic songs and shown pride in being Americans. Our country right or wrong (except when led by Boomers). But isn’t it strange that a sociopath would have so much empathy for the Vietnamese?

Boomers did more than fight against the war. We were hippies, went back to the land, engaged in spiritual discovery through drugs, yoga, and group exercises, led the feminist movement, promoted sexual liberation, made great music, fought for civil rights and explored alternative healing. We had encounter groups, cults, and consciousness raising. We explored Asian religion and philosophies. We were the most creative and passionate generation ever. Gibney likes to lump the right-wing in with the tremendously progressive development that

characterized our generation. But treating Boomers as one undifferentiated entity, Gibney likes to lay all the sins of individual Boomers at the feet of the entire generation. Is he willing to do the same to other generations? Like, say, his own. If only we knew what generation he belongs to. So far, it seems to be a secret.

But every bad thing any Boomer did, is our collective sin. Clinton was a neoliberal. He 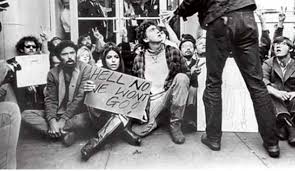 abolished Welfare (actually Gibney would probably approve as he doesn’t even like Social Security), signed trade agreements. But we are also “guilty” of the SDS and the Weatherman which was anti-capitalist and anti-imperialist. We are “guilty” of VD and abortion, filthy libertines that we are. Yes, Gibney reminds us. Sociopaths are promiscuous. For “I-focused” people, we certainly managed to build many powerful mass movements. We lived communally, we built political movements. I don’t see the X generation continuing what we built. They would rather call us self-centered than try to build on what we started. But if we are all just “sociopaths,” then it’s alright because the movement they deserted is no damned good anyway.

4 thoughts on “Talking ‘Bout My G-Generation”