How long sad moments last
When joy is gone so fast.

The first time I saw the movie, Black Orpheus, I was living in New York. It was a gray, winter day. This movie, about which I hadn’t known anything before it burst onto my TV screen, came across as a blast of happiness, a pure ray of sunshine. I had never been in the presence of such pure joy in my life. Ironically, the movie is full of tragic events. But the title song really says it all. It isn’t a tragic movie. It is a balanced movie. It shows happiness and sadness as a pattern, as a texture of life. I saw Black Orpheus later in the movie theater with my sister. At the time, I was exploring Catholicism and I appreciated how the textured pattern fit in with the liturgical calendar of the Church. As the Bible says somewhere, “For all things, there is a season.” I explained some of those thoughts to my sister who, at the time, was very much into Scientology. She got really angry at such a philosophy. She insisted one can really be happy all the time.

The idea that it is possible and desirable to be happy all the time is one that resonates with me although I “know” it isn’t possible. Several philosophies I have explored insisted that joy was the real truth of life and suffering only a mistake or an illusion. Ayn Rand expressed this belief and Thelema, the “religion” expounded by Aleister Crowley in The Book of the Law seems to also support this brave philosophical view. I have tasted many forms of joy in my life. There is euphoria which puts one above all of the “slings and arrows of outrageous

fortune.” I would gladly live in the State of Euphoria if I could only find the place. In Harry Potter, there is a potion called felix felicis which gives the user the prospect of infinite possibilities. “Slowly but surely, an exhilarating sense of infinite opportunity stole through him; he felt as though he could have done anything, anything at all.” In a way, that is even better than euphoria. It leads one on, moves one forward. The movie, Limitless, deals in that feeling. Interestingly enough, Kevin Dutton described that limitlessness in The Wisdom of Psychopaths when he recounts his experience of “Transcranial magnetic stimulation”

(TMS) in which scientists manipulated his brain with electromagnets to make him exactly like a psychopath. He described it as “an easy, airy confidence. A transcendental loosening of inhibition. The inchoate stirrings of a subjective moral swagger: the encroaching, and some how strangely spiritual, realization that hell, who gives a shit, anyway?…An insuperable feeling of heightened, polished awareness. …my whole way of being feels like it’s been sumptuously spring-cleaned with light. My soul, or whatever you want to call it, immersed in a spiritual dishwasher.” Compare the above with my own Free to Choose discussion of psychopathy.

The joy in the movie, Black Orpheus, was not of that type. It was tinged with sadness. In fact, the brevity of happiness was exactly what gave it its poignancy. Is there a sad happiness that has qualities all it’s own? To look at it from a Christian theological perspective, the limitless consciousness is like that of God the Father while the one in Black Orpheus is that of God the Son. It’s not omnipotence but agape. 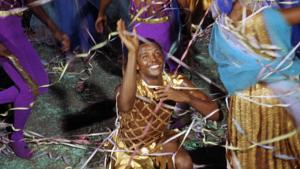 It seems poor people seem the most capable of joy. I could be wrong but it’s something I’ve noticed. Not that poor people don’t suffer. But they somehow seem more receptive to joy whenever it comes to them, possibly because it’s such a scarce commodity. The joyousness in Black Orpheus is something that seemed to 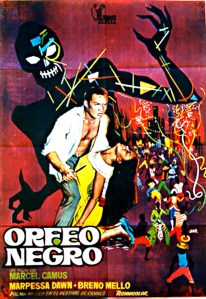 exist in the very air of the movie. The constant drum beat was like a living presence. The land, itself, seemed to be breathing. This was the backdrop of all the dramatic events in the story which was loosely based on the Greek myth of Orpheus and Eurydice. Eurydice is doomed from the beginning. She is being stalked by death, who could be a real person or a mythical force. She flees to Rio and finds love with Orpheus (who makes the sun rise with his music) only to be overtaken by her fate. The characters in this movie are very passionate. Although happiness is always fleeting, they pursue it with all their hearts.

I love all forms of happiness. I am confounded by the subtle and powerful differences between them. Perhaps that’s why my “self” is fluid and flexible. So I can have everything.

One thought on “Sadness and Joy”