Bladerunner is a kind of cult film which has appeared in several different versions. Not really being one of the dedicated buffs of this film, I have only seen the final version so my impressions will be based on that version. The film is obviously futuristic and I would add dystopian. The society is more advanced technologically than our real world but socially it shows signs of being retro. For example, a huge electronic poster advertises Coca Cola. A voice on a loud speaker urges people to seek life in the “off world” where they can “start over” and find opportunity and adventure. This suggests that the world they live in is somehow deficient in both. There are jobs in the world. For one thing, the Tyrell Corporation which manufactures replicants must have a workforce. And we see people selling food.

But the greatest number of jobs seems to be in the production of artificial life. It is so advanced, people specialize in different parts of the body. For example, some people specialize in creating only eyes. Some create scales for artificial snakes. It is also multi-ethnic with a preponderance of people of Asian extraction. The interesting artificial life of this society is the replicants, androids who are “more human than human” according to the Tyrell Corporation that created them. They are made to be slaves of humans. They have super strength and are used for dangerous and onerous tasks. Following a rebellion, they have been banned from the earth and work only in the “off world.” The advertisements urging people to go to the “off world” mention the advantage of having replicant slaves designed just to meet their needs.

While there seems to be a wide divide between the lives of humans and the lives of replicants, humans don’t really seem all that free either. The film starts with Rick Deckard (Harrison Ford) being arrested and dragged to the office of his former boss, Bryant, who wants him to go back to work as a bladerunner. Deckard’s retirement means little to Bryant who threatens Deckard that as long as he isn’t a cop, he is a mere nobody with no power (the implication being that he can be victimized with impunity).

If replicants are really “more human than human,” their enslavement raises ethical

issues. Most systems of ethics consider human life the most important phenomenon in the universe. Despite the existence of an animal-rights movement, human supremacy reigns almost universally. Even in the TV series, Buffy, the Vampire Slayer, there is a tedious discussion in which Buffy makes a clear distinction between slaying vampires and demons and killing human beings. The former is good and the latter terribly bad. As Buffy calls killing vampires “slaying” as if that makes it seem cleaner or something, killing replicants is called with the bitterly ironic name of retirement. Replicants “retire” but never see a pension nor any kind of reward for their hard work. As slaves they have no rights. But how free are their human masters? 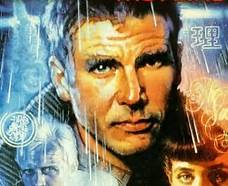 What does “more human than human” really mean? Is it just an advertising slogan emphasizing how “real” they seem but not literally true? Or are they really more human than human. How can they be more human than the thing they are imitating? Empathy seems to be the feature that distinguishes replicants from humans. But there are people known as psychopaths living in the world today who are deficient or even incapable of empathy and there are people who want to exclude them from the political arena by administering a test to find who they are and limit their civil right to participate in democracy. Some people would deny the very humanity of psychopaths and think all should be “retired.” Perhaps Bladerunner is more real than reality.

In Bladerunner, they use a test to spot the replicants. The only way to know for sure whether someone is a replicant or a human is an empathy test using a Voight-Kampff machine. Replicants don’t possess empathy and humans, supposedly do. Funny how this empathetic species is capable of creating sentient beings to be exploited as slaves. Despite a feminist movement, the world of Bladerunner has female replicants known as “skin jobs” to work as unpaid prostitutes. The dehumanizing term “skin job” speaks for itself. The replicants  are endowed with only four years of life so they won’t become self-aware enough to rebel. That tactic didn’t work. Four replicants rose up against their human masters. Their leader, Roy Batty, wants to extend his life beyond four years. In order to do this, he must confront the man who created him, Tyrell. It looks like Roy isn’t just in it for himself. He seems to see himself as a true leader and champion of his kind, seeking liberation for all replicants. When he learns of the death of his fellow mutineers, he is distraught, something contradicting the idea that he is without empathy. From Roy and Leon, we hear the bitter, “You know what it is to be a slave? To live in fear.” The humans may deny the replicants their humanity but it speaks to us loud and clear.

Another rebel, Leon, a manual laborer, kills a bladerunner, Holden, who is conducting the Voight-Kampff test on him. Holden conducts himself in a way that seems very far from empathetic. When Leon admits he is nervous, Holden doesn’t even make the slightest gesture of trying to make him feel more at ease. A documentary on the British Channel 4 called Psychopath Night has a countdown of films featuring psychopathy. One of those films is Bladerunner. Kevin Dutton and James Fallon

watch the films and comment on them. They both thought the scene with Leon was stunningly psychopathic. But why wouldn’t someone kill the man who is threatening his life? I would think even an NT would do that much for himself. The documentary also features M.E. Thomas, author of Confessions of a Sociopath who tells us she sometimes feels like a character in Bladerunner herself, having to hide her true nature to avoid the wrath of the NTs.

toss her off as a “skin job.” She exists for their pleasure. In other words, she’s a sex slave. We see her in the film, homeless and lost, going to sleep in a pile of garbage. Fortunately, she encounters J.F. Sebastian who lives in an abandoned Bradbury Building. He is apparently at loose ends. He created a bunch of electronic toys to be his “friends.” He is also playing a game of long distance chess with Tyrell. He takes Pris in and gives some help to the replicants, putting them in touch with Tyrell.

A fourth replicant, Zhora, another “skin job” who is also an assassin, is working under the name of Taffy Lewis who is working as a dancer in a sleazy nightclub. Deckard is dedicated to the job of killing all four of the rebels. A fifth replicant, Rachael, a secretary to Tyrell himself doesn’t know she’s a replicant until she is forced to take the test and is informed her memories are the memories of someone else, implanted in her brain. Deckard and Rachael fall in love. Rachael turns on her own kind, killing Leon.

Bladerunner is stunningly beautiful in a dark way. It has a haunting quality. And it bears an eerie resemblance to our reality. It’s a strange movie.

One thought on “more real than reality”