Everyone knows about the Tate/La Bianca murders by the Manson Family. Three girls were given the death sentence, later commuted to life imprisonment. Now Leslie van Houten is about to be paroled.

Sharon Tate’s mother, Doris Tate, has visited all the parole hearings of the family members to argue against it. She has said she regrets the fact that the death penalty has been abolished. She calls this murder “one of the most infamous murders.” It’s understandable the mother of a murdered person would feel this way. But it’s less logical for society at large to talk this way. I think the reason the Manson killings are considered so heinous is the fact that they were so bloody. The victims were not tortured. Shouldn’t murder with torture be considered worse? Shouldn’t rape and murder of little children be considered more worthy of condemnation?

Doris Tate has devoted her entire life since the death of Sharon to making sure the Manson killers suffer. Her lifetime devoted to hatred shows on her face. It’s sad that a tragedy like the Tate/La Bianca killings should become the focus of this woman’s entire life.

Now that Leslie van Houten is finally getting out of prison, Sharon’s sister, Deborah, has taken up the vindictive cause of making sure the Manson girls suffer. It looks like Deborah’s face shows the same ugly hatred her mother’s face shows. I love my sister but I can’t imagine devoting my life to avenging her murder, should such a tragedy befall her. Sorry, Jennie!

Deborah has put up a web site that rallies people to sign a petition to ask the governor to prevent Leslie from getting paroled. As old as she is now and as many good deeds she’s performed since she’s been incarcerated, Deborah considers her an irredeemable “monster.”

She calls Leslie a “domestic terrorist,” a monster and a sociopath. As a psychopath, I wonder if Deborah thinks I belong in prison as well even though I never killed anyone. I have attempted murder once. That would probably mean I don’t belong at large. Good thing the system is nicer than people like Deborah and Doris. 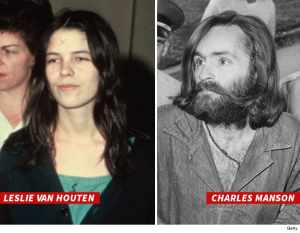 She claims to believe in rehab except for these “monsters” who were once under the influence of Manson. Imagine what it’s like for any convicted felon trying to get parole. They go up before the Parole Board again and again. They offer signs of their rehabilitation only to hear that the heinousness of their crimes means they are to be rejected over and over. WTF! The board knew about their crimes before the hearing. Why have a hearing? Yet, at long last, now that Leslie is an old lady and far from the person who committed her crime, she is finally getting out. She will not “walk free.” She’ll still be on parole, under the supervision of the parole officers, under restrictions of curfew. But that’s just too good for the murderer of Deborah’s sister.

Deborah goes on and on, listing the virtues of Sharon and the other people in the house that night. They were “young, productive, happening” folk. Hey! Nobody is defending murder. It’s clearly “wrong.” But the perps have spent most of their adult lives behind bars. They have hardly gotten away with it.

But the crowning irony of it all is that Leslie wasn’t even along when Sharon Tate was murdered. She only participated in the killing of the La Biancas. Moreover, she didn’t kill them. She only stuck a fork in them after they were dead. Not nice, to be sure. But does it make her a “monster?” Or a “terrorist?” Terrorism is an act of violence committed for political purposes. She calls these people “terrorists,” not “former terrorists,” as if they can’t wait to got out and do it again. No rational person thinks they are a threat today. Maybe Manson was until his death. He seemed to be in the same place he was in then. But the girls have moved on. Perhaps the Tates should do the same.

12 thoughts on “The Ugliness of Hate”