Who is the Real Victim?

Gaslighting is usually discussed as a sinister thing Narcs and ‘Paths do to nice people. But the reality is that everyone gaslights. All it really means is trying to alter someone’s sense of reality. Not all gaslighting is destructive and done with malicious intent.

The above video not only makes that point and gives a few lessons on how to gaslight with the proviso that we “should play nice” and use it for good. Therapists’ jobs are to change a patient’s beliefs into something healthier for him. Informing a friend of the fact that someone else has spread gossip about him can be an act of kindness. When someone tells us things like that, it’s important to know who they can trust.

The term, Gaslighting is almost always used in describing its negative use. The term, itself, comes from the 1940 movie, Gaslight about a husband who is trying to drive his wife crazy by making her doubt her perceptions of reality. The term became popularized by websites and blogs warning people of behavior at the hands of “predatory” narcissists and psychopaths. I have already covered the subject of such sites in A Psychopath’s Guide to Haters.

Gaslighting is closely associated with Flying Monkeys, people who are manipulated into helping a malicious person persecute someone else. A perfect example of gaslighting being used maliciously with flying monkeys is the way Republicans and other Righties have turned masses of Americans into flying monkeys against Hillary Clinton. While political “discourse” has unfortunately grown increasingly into character assassination, the slander against Hillary has been uglier than any other case. To be fair, Donald Trump has been pretty spectacularly badmouthed too but his enemies don’t have to make things up. His record since in office provides plenty of material. His (dwindling) supporters didn’t miss a beat in claiming victim-hood for Trump, saying no other president has been treated as badly as he has (although he has yet to be assassinated or called “nigger”).

As ugly as slander, whispers in someone’s ear to the effect that she has been slandered can really cause people to question their reality. Is it true that X has said that about me? Who is repeating it? This has been done to me in an office and I have seen the same tactic used on others. Bullying can do the same, encouraging people to join in persecuting someone safely from the anonymity of the crowd.

However, the term gaslighting has been most commonly invoked concerning behavior of couples toward each other during intimate relationships. “I never told you that! You’re delusional!” “Why do you always…?” “You embarrassed me at that party. Everyone was talking about your (outfit) (behavior) (weight).” “Are you bipolar?” “Have you forgotten to take your meds?” The You-Tube documentary, The Psychopath Next Door

has a segment in which the author of the book Women Who Love Psychopaths, Sandra Brown, played a verbal description of a woman who was a “victim” of a psychopath. Her face was never shown for her “safety.” Her story was that this charming man “love-bombed” her and she fell in love with him. After the wedding, he changed. But they stayed together long enough to have a child. Finally, she consulted a counselor who told her, “Your husband is a psychopath. He will never change.” On the strength of that, she divorced him. The story sounds very prosaic to me. Don’t all suitors put their best foot forward during courtship? Don’t relationships usually 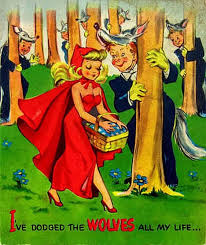 change once they are married? It even has a name: The Honeymoon is Over. How can a “counselor” diagnose someone he has never even met? Is it just possible that the counselor was used as a flying monkey? And how about Sandra Brown? And the makers of the documentary, for that matter? Disclaimer: The documentary was pretty good for the most part. By applying the label psychopath to the man (who never gave his side), his ex-wife suddenly became his “victim.” His courtship, a predatory act. And, honestly. How is calling your husband/wife a narc any different from calling him/her “bipolar?”

Looking at the above example, isn’t one moved to re-evaluate the stories on these websites that claim to give information on people they have decided are “narcissists” and/or “psychopaths?” How many of them have been even clinically diagnosed? Martha Stout, The Sociopath Next Door (a different work), said sociopaths and psychopaths love to play the victim. What does one do when both sides are claiming victimhood?