This is a blog I am starting on Word Press about the wonderful world of Cluster B. Cluster B, according to the DSM (Diagnostic Statistical Manual created by the American Psychiatric Association) is one of three groups of “personality disorders.” It consists of Histrionic, Borderline, Narcissistic and Psychopathic. Well, the DSM actually removed the word “Psychopathic” and substituted “Antisocial,” abbreviated to “ASPD.” Whatever.

I recently discovered another index of personality disorders (The International Statistical Classification of Diseases and Related Health Problems published by the World Health Organization of the United Nations). ICD-10. This manual has a code for “Dissocial personality disorder” which includes…

I am adding some controversy to this discussion. The DSM-5 has come under some criticism that I consider worthy of consideration. The article appears in Psychology Today by Allen J. Frances, M.D., called My Debate with the DSM 5 Chair. Although it is several years old, the DSM-5 has not been updated since the time of that writing. The article points out some disingenuous aspects to the way this important document was created and not peer tested. The gist is the failure to include Psychopathy among the Cluster B “disorders” in defiance of the leading expert on psychopathy, Dr. Robert H. Hare. The result has been that people just go along acting as if psychopathy were in that cluster but called ASPD while that “disorder” is not really defined in the same way. Psychopathy is pervasive while ASPD transitory, varying in accordance with changes in behavior. Since pervasiveness is a characteristic of personality disorders, this change is troublesome. Another article in Psychology Today also takes issue with the authors of the DSM-5. Written by Scott Bonn and called Diagnosing Psychopathy, is pretty negative towards us, calling us “manipulative and dangerous” but has some solid information by Robert Hare. It says, “Approximately one-third of all prison inmates who are considered to be ‘antisocial personality disordered’ meet the criteria of severe psychopathy specified in the fifth edition of the Diagnostic and Statistical Manual of Mental Disorders (DSM-5).

“For the very first time, the APA recognized psychopathy as a ‘specifier’ of clinical antisocial personality disorder in the DSM-5, although psychopathy is still not an officially accepted clinical diagnosis. The recognition of psychopathy as a specifier of clinical ASPD by the APA follows nearly fifty years of research and debate.”

Both of the above articles have been invoked by Tina Tayler, author of No Psychos, No Druggies, No Stooges, The Corrupt DSM-5’s Missing Psychopathy Diagnosis in which she offers the audatious opinion that the DSM is corrupt because the people writing it are, themselves, psychopaths. I wouldn’t make such a suggestion myself, and I resisted adding this for years. But somebody has got to shake the boat and get some fresh thought admitted to that elitist body of obfuscation.

People with Cluster B “personality disorders” are often considered evil, incurable and generally bad news. But some of the most interesting people in the world are in that Cluster. You shun the Psychopath and yet are so fascinated, you keep flocking to movies about us. Face it. We lift you up from your mundane lives and provide some excitement. Oh, yes. We are grandiose. Grandiosity is the best drug of all.

I found this amusing poem on a blog called Love Fraud: 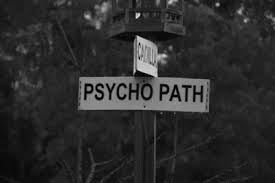 Beware the Borderline, my son!
The tongue that bites, the spiteful wrath!
Beware the Narcissist, and shun
The frumious Psychopath!

And as in uffish thought he stood
He soon was driven to conclude
That labels can be just a game:
The Borderline, siren of ill fame
Is oft a Psychopathic dame
Disguised with altered name.

I have known for years that I am psychopathic. I just never felt like talking about it until recently. We know, after all, what most people think of us. But several things happened to change that for me. In the first place, I was finally able to retire. Career can be quite a ball and chain for anyone who doesn’t plan a life of crime. Sure, I’ve broken the law but I never made a career of it. Well, a couple of times but not for long. So I had to keep my public image within a realm the rest of the public (whom I mostly despise) would approve. It really feels good not to have to care about that any more. Another factor was the publication of Confessions of a Sociopath by M.E. Thomas. It encouraged many of us to also disclose. When we did, we found many of our own kind out there. There is strength in numbers. The Internet made it easier to find each other. Of course, many of us are still closeted to some degree. We are still considered Public Enemy Number One by the majority.